Chicago, Theory, and the Discourse of the Irish Emigrant Letter

Patrick O'Sullivan
Chicago, Theory, and the Discourse of the Irish Emigrant Letter
...a paper I gave at...

Chicago: an Irish-American Metropolis?  Politics, Ethnicity, and Culture from 1830s to the Present Time”

An International and Multidisciplinary Conference

Below, I have pasted in the illustrations and references to accompany the paper...

1.  This international and multidisciplinary conference was a partnership between the universities of Chicago, Caen Normandie and Paris.

A good conference, a good survey of the present state of Irish Diaspora Studies - as seen from Chicago and Paris...

2.  As ever, I moved forward with these things, cautiously, step by step - I want to get back into the habit of giving papers, and I wanted to give a coherent paper.

And spend no time quarrelling with technology.

So, I put the illustrations and references here on my blog...  With a Tinyurl ready to put into Chat in Zoom.  It worked.

This has revealed that many of the references in my database are a bit untidy - but I knew that.  I tend to catalogue a resource quickly, get it done - and then tidy the reference in the database as it is called up.

So, here you see me halfway through that task...

3.  The three paintings accompany some brief sections in my paper, as presented at this conference - where I look at the wider research literature on 'the letter', how letters appear, in theatre, literature and art - and life - and the place of the 'Emigrant Letter' in that research literature.  Which, you will appreciate, is a big subject on its own...

These are my three favourite paintings of the 'Emigrant Letter' in action - in England, Ireland and Spain.  Why are these three my favourites?  You will see that in all three paintings the task of reading and writing is given to the child.  Very telling, about the ways in which our people embrace and harness the technologies of the word.

Two fine books...  And entry points as Irish Diaspora Studies thinks about 'the peasant' and 'the city'...

5.  My thanks to the organisers of the Conference - and to the friends, rediscovered and new, who appeared on my screen, here in my attic in Yorkshire.  Special thanks to Thierry Dubost and Alexandra Slaby, Caen Normandie. 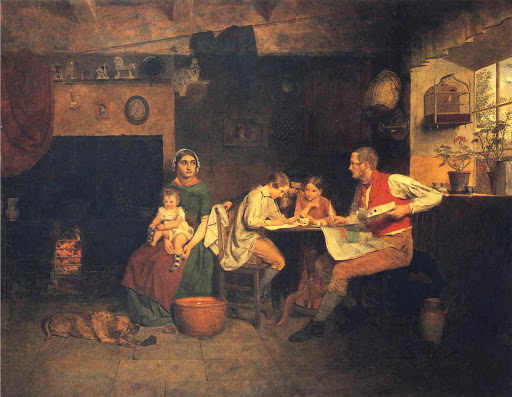 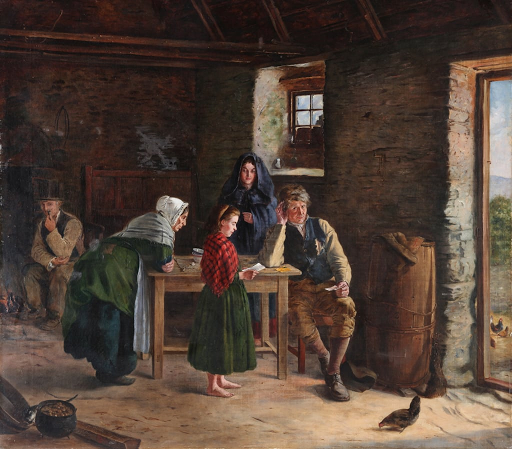 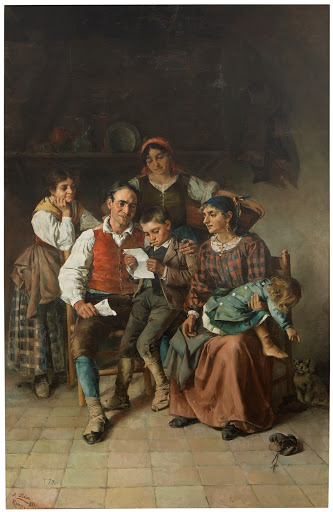 Daybell, J. (2012) The Material Letter in Early Modern England: Manuscript Letters and the Culture and Practices of Letter-Writing, 1512-1635. Palgrave Macmillan.

Grabowska, I. and Buler, M. (2019) ‘The Centenary of the Polish Peasant in Europe and America through the Contemporary Concept of Social Remittances’, Polish Sociological Review. Polskie Towarzystwo Socjologiczne (Polish Sociological Association), (205), pp. 85–102.

Hall, D. and Malcolm, E. (2019) A New History of the Irish in Australia. Cork University Press.

Posted by Patrick O'Sullivan at 14:52 No comments:

This is a version of a note that I have placed on discussion groups.  It is not a review - it is simply a worried note, worried that I might easily have missed this important book...

Yes, it is a bit squalid to talk about an expensive academic book on social media.  I will find a sequence of important open access books and articles, to try to make amends...

I came across Rachael Walsh's new book as I move away from work in another part of my life - around the discourse of 'decolonisation' - which made me aware of the ways in which activists and theorists of decolonisation talk about 'land' and the redistribution of land.  But, often, 'land' in an abstract way, and with little connection with countries and communities where land redistribution has actually taken place.

If that work had not been in the background I might have missed Rachael Walsh's book.  For the book has been given a strange title by Cambridge University Press, a strangely prosaic title - I guess to slot into the series, Cambridge Studies in Constitutional Law - with no indication that this book is an important contribution to Irish constitutional history, and the history of twentieth century Ireland.  And - since the book is about 'land' - potentially an important contribution to Irish Diaspora Studies...

The starting point of the book is the fact that the 1937 Irish Constitution has 2 provisions that protect individual property rights.  Article 40 3 2 protects those rights and other rights against unjust attack.  Article 43 explicitly protects property rights, but adds that they can be regulated by the principles of social justice.  And can be limited by the exigencies of the common good.

This combination, the protection of property rights but with the requirement that they be regulated to secure social justice, is described as unique in the English-speaking, common law world.  The book is very good at placing itself within the debates on constitutions and their workings throughout the world - and of course those debates tend to be led by US constitutional theorists.

In my reading of the book I concentrated, first, on its exploration of the ways in which theories of property entered the 1937 Constitution - obviously, through Catholic theology and other European developments.  But Ireland's history - the Penal Laws, the Famine, the Land Wars, the Land Acts - and the work of the Land Commission, these are there too.  Remembering that Dooley, The Land for the People, says that the impact of the Land Commission on Irish society was surpassed only by that of the Catholic Church...  But I am now reading the further chapters, on the ways in which Irish judges and politicians have negotiated these constitutional requirements.  'Land' is not an abstraction...

I do hope that this fine book gets the specialist attention that it deserves.  I look forward to the reviews...

Posted by Patrick O'Sullivan at 11:58 No comments: