No Irish, no blacks, no dogs - lace curtains and iconography

No Irish, no blacks, no dogs.

This is a note for Bill Mulligan's Irish Diaspora Studies Facebook group - there has recently been (yet more) newspaper comment on that iconographic sign.  And I want to make some images available to the Facebook group.

I might return to this note at a later date, if I find it needs tidying...

Tony Murray, who is quoted in the recent Irish Post article about the sign, tells me that the image displayed with that article - and in the 2015 Guardian article - is NOT the image stored within the Archives of the Irish in Britain at London Metropolitan University.

London Metropolitan University would charge a fee for the use of the image.  Tony Murray thinks that someone constructed a version of the image to avoid paying a fee.  It is this doctored image that is now widespread.

Nowadays it is possible to search the web for images...  I have found 4 versions...

Now very hard to find.  This is the original Archives of the Irish in Britain version - I have checked this with Tony Murray.  Note the fuller view of the window, the IRISH, BLACKS, DOGS sign, and above that the little Bed & Breakfast sign.

Note the version of the plus sign used as an ampersand in Bed & Breakfast.

Note especially the lace curtain - an important part of the iconography. 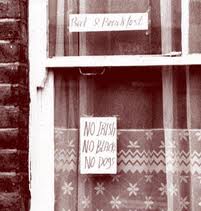 This version I discovered through the search.  I have not seen this before.  It must put Image 1 into a new context.

Again, a fuller view of a window - a window set into a pebbledash wall.  Similar but not identical IRISH, BLACKS, DOGS sign.  All upper case lettering, I think.  Different layout Bed & Breakfast sign - but similar ampersand. 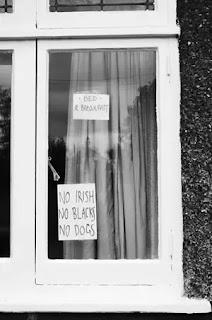 This is the widespread version, believed to be a doctored version of Image 1.

No wider image of the window, no Bed & Breakfast sign.

The same PATTERN lace curtain as in Number 1.  But there is distortion and modification.  Note the three half stars to the left of the sign - there is nothing like that in Image 1. 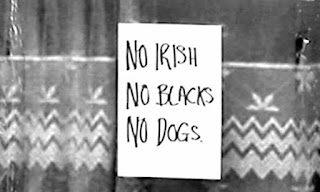 This turned up in the searches.  I believe it to be a recent do-it-yourself version to illustrate an online article.  Easy enough to do.  I am digging. 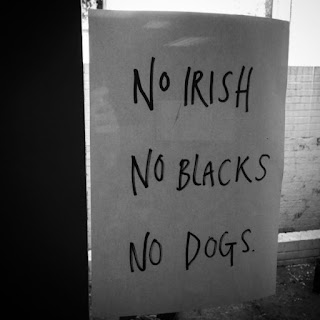 There are lots of questions you can ask of these images...

Versions 1 and 2 look so similar, and so posed.  Was a photographer given an assignment?

Is that paper size A4?  Look at the bricks to the left of the window.  It has been pointed out to me that the piece of paper is the same height as two and a half London house bricks.  So maybe height 182 mm, much smaller that A4 paper, 297 mm.

All that being said, people whose word I trust tell me that they saw such signs in real life, as young people in London...

We needed somewhere where we could display the images in sequence, and make comparisons.  This blog entry is the best I can find - and it works...

I have not given any specific source for each image.  There is a convention, that we give a web address and the date a web site was accessed.  But that is unhelpful here.

What you can do now, because I have brought the images together, is do your own web search, see context and make comparisons.

It will depend on how you have your own computer set up, and on what your system allows.  But, in Google Chrome, if you RIGHT CLICK on an image, there is usually a way to search the Web for that image.  You can test that now, here on this blog - RIGHT CLICK on the 4 photos that I have collected, above.

Image 3 (the image that we know is doctored)

But Google Images also tries to link Image 4 with Image 3.

That is searching through Google Images - other search systems create different patterns, and I am experimenting.  But the overall pattern is clear.

Reaching Images 1 and 2 sometimes needs a bit if digging into old blogs, which will test your ingenuity.

So the known phoney, Image 3, dominates.  As we have seen - now that we have a context - it is obviously a doctored image.

Amongst those 300 and more sightings of Image 3 you will see many established newspapers and journals - it is very odd, to put it mildly, that this image has been circulated and reproduced so widely without anyone ever stopping to examine it.

Examine it and search for a context.  It is not hard.  You have just done it.

Dealing with the images in reverse order...

This, I deduce, is a very recent do-it-yourself effort, created to illustrate a legal article.  There is no attempt to set the scene, no B & B sign - it looks like someone's office or factory.

I must include this image because it will turn up in the search.  It does show the image search working well.  And it shows how much the IRISH BLACKS DOGS sign has indeed become an icon.

This is the widespread doctored version.  I think that it is obviously a mock-up - I think that there are clear signs of Cut & Paste.

This one is very interesting because - as I say - I had not seen it before.  Its existence was revealed to me by the search.

It has all the elements of Image 1, the two signs, the framing window.  Note that it is a casement window, in a pebble-dashed house - and you can just see some stained glass in the lower part of the window above.

Trees are reflected in the window.

Why do I think that Image 1 looks 'posed'?

I had worked for Time Out magazine in the 1970s - this is just the sort of thing a photographer sent out to bring back an illustration would come back with.

It displays all the elements of the narrative.  It reads down within the framing window frame.

First the Bed & Breakfast sign.  The eye takes in the lace curtain background.  Then the No Irish sign

What I have listed as Image 2, the new discovery, is so similar - I think a good working assumption must be that the same photographer was responsible for both Image 1 and Image 2.  But, if I were a picture editor choosing between 1 and 2, the lace curtain would sell Image 1 to me.

The same reasoning, I guess, guided whoever doctored Version 3.  The lace curtain sells it.

Note that this is a sash window, in a London brick house.  We feel we already know that window - we have walked past it many times, a North London terrace.

The trees are clearly reflected in Image 2.  Can we see something white reflected in the window in Image 1?  Some people think they can make out the white signage of a London bus.

Images 1 and 2...  Two very similar photographs, telling the same story in the same way, possibly by the same photographer.  Are there more out there, is there a portfolio?  Can we identify the photographer?

I think that I have taken this discussion as far as is appropriate in a blog entry.  Obviously the discussion could go in many different directions.  One direction would be to explore the gaps and distortions in the research record of the Irish in Britain, and of the Irish Diaspora more widely.  This we are doing.

In the 1970s and 1980s I worked with the creative photographers of that period.  My home, in Bradford, Yorkshire, is not far from the National Science and Media Museum - we spend a lot of time looking at photographs,

As I have said, the discovery of Image 2 must change the discussion.  Images 1 and 2 are very interesting.  As photographs they are efficient.  Perhaps someone did wander the streets of London, camera at the ready.

Or perhaps someone, with appropriate prayers, made an icon.

Image 3 is immensely interesting.  As you point out this is a modification of Image 1.  What has been done is that the fold of the curtain containing the single half star to the left of the sign has, for whatever reason, been cloned three times, with artefacts from the (clumsy) cloning especially visible in the first fold.  See the attached graphic where I have lined up the star from the original, Image 1, and the three stars from image 3 side by side behind a grid   To my eyes they are clearly the same star.  Perhaps this is just to obscure the copyrighted nature of the original as you say.  Interesting all the same.

Posted by Patrick O'Sullivan at 12:37 No comments: