Hladowski sings O'Sullivan - a collaboration made in Yorkshire...

The Hladowski sings O'Sullivan project is done - and the album has been released...

I have made this web page as a starting point...

It is a useful link.  It is easy to share.  It works well on phones and mobile devices...

And the album is also visible everywhere else...  Here it is, collecting on YouTube...

In the present crisis, I am not sure how much more can be done...

Posted by Patrick O'Sullivan at 18:17 No comments:

This is the link to the freely available and searchable Archives of the Irish Diaspora List, 1997-2017…

The Archives of the Irish Diaspora List, 1997-2017 can be downloaded here…

Note that downloads are available in three formats…

I have put versions of the note you are reading now here, in the ABOUT section, of that web site.

There is also a version on my blog, at Fiddler’s Dog,

and brief versions in other places, notably Facebook and LinkedIn…

Enough time has now passed, and I think I can now bring to your attention the availability of the Archives of the Irish Diaspora List, 1997-2017 as an online resource.  The Archives are free for anyone to use for scholarly and research purposes.

The Archives of the Irish Diaspora List, 1997-2017, make available some twenty years of Irish Diaspora Studies reference and discussion, over an important period in the development of our field.

I thank especially my friend and neighbour, Stephen Sobol, formerly of the University of Leeds, who was my guide and support through all the technological changes described below.

I thank Bill Mulligan, Murray State University, Kentucky, who has long been a support and a friend - and Anthony McNicholas, University of Westminster, who stepped in at a crucial time,

Yet again, I thank Russell Murray, formerly of the University of Bradford, who can never be thanked enough.

Some day, in the right circumstances, I might do a Secret Lecture, on 'The Secret History of the Irish Diaspora List...'

The Irish Diaspora List arose out of the networks I put in place to bring together, edit, and publish the series, Patrick O’Sullivan, Editor, The Irish World Wide, 6 Volumes, 1992-1997.

That series was created in the era of paper letters (in envelopes), phone calls, faxes – and personal contacts, hunted down, one by one.  My 65 contributors were spread over 4 continents.  And some day I might do the Secret Lecture on 'The Secret History of The Irish World Wide.'  Subtitle:  'What I got wrong.'

In the 1990s the use of computers and computerised systems began to take off – the web, databases, catalogues, bibliographies and email.  Of course, the universities were early developers and users of email.

I will leave it to someone else to write the history of Majordomo – it was a sturdy piece of software.  Though – in a pattern that we are all now familiar with – you had to work with the software in order to find out how the software worked.  At one point, I wrote a Guide to Majordomo, so that not everyone had to go through that strange process.

There was one specific problem with the Majordomo software - and, again, it is a problem we have by now all encountered in other areas.  There was no built-in route to the creation of an archive.  But it was obvious from the beginning what the route had to be – there had to be, somewhere, a database with its own email address.  This we created.  Throughout the 20-year history of the Irish Diaspora List there has been, in effect, an extra member, an email address, which collected every message sent to the List and stored it in my back-up database.

In 2004 I moved the Irish Diaspora list to Jiscmail, the UK’s academic Listserv.  In Jiscmail parlance, I became the 'owner' of the Irish Diaspora.  Which I thought was funny then, and still think is funny now.

In 2011, we were able – with the help of the technicians at Jiscmail – to integrate the various incarnations of the Irish Diaspora List, including the rescued material from Majordomo, in to one database, within Jiscmail.  So, from 2011 onwards, the entire archive, from that 1997 beginning, was preserved within Jiscmail, in the familiar Listserv format.  And, of course, messages continued to accumulate, within Jiscmail, and in my back-ups, as Irish Diaspora Studies discussion continued.

By 2017 Bill Mulligan and Anthony McNicholas felt that the Irish Diaspora List had become moribund, and it should be wound up.  I stepped in to negotiate with Jiscmail – specifically to make sure that an up to date version of the Archives would be preserved.

Without going into a lot of detail, the Archive, as presented to us by Jiscmail, needed a bit more rescuing.  And it is that rescue, incorporating all the incarnations of the Irish Diaspora List that is preserved at…

It is proposed to place up to date versions on disc with the Archives of the Irish in Britain, London Metropolitan University, the Glucksman Ireland House, New York University, and the Mellon Centre for Migration Studies, Omagh.

The end of the Irish Diaspora List was sad, in many ways.  The study of Diaspora has entered an interesting phase.  But the email 'list' is certainly in decline.  That being said, none of the replacements really work - they do not promote organised discussion.  And there is that recurring problem of the archive.

At its height, the Irish Diaspora List had, at most, a few hundred members.  At its end it had just 212 members – one of those members was, of course, my back-up database with its own email address.  Further discussion of the membership, and the use made of the Irish Diaspora List, I can leave to the Secret Lecture.  But I think it is possible to argue that those few hundred members represented a significant proportion of the number of people in the world with a genuine, scholarly, interest in the study of the Irish Diaspora.

But here are a few thoughts on the management of the list.

In the background I had a number of standard emails, text ready to send, designed to deal with recurring issues, attacks or critiques – and the detail of all that can be left to the Secret Lecture.  This, from 1997, was the standard email sent to all new members of the Irish Diaspora list…

The Irish-Diaspora list is an email discussion forum, dedicated to the

scholarly study of the Irish Diaspora, and its social, economic,

The Irish-Diaspora list is hosted, as a service to world-wide Irish

The Irish-Diaspora list is run by a small team of volunteers, led by

and the Internet to support, for example, Irish family and social

networks or discussions of current political debates and crises.  And we

Irish Diaspora, and is able to support theoretical, methodological and

comparative perspectives - this forum is provided by the Irish-Diaspora

have written, fragments of work in progress, brief discussion papers,

and reports on conference papers - thus we envisage something that would

be of special help to the more isolated Irish Diaspora scholar.

Occasionally material is taken from the Irish-Diaspora list and given

Membership of the Irish-Diaspora list tends to expand through

introduction and invitation.  In the first instance contact Patrick O'Sullivan…

As can be seen that standard introductory email offered some hopes and dreams - and dealt with a number of predictable issues, issues that will be familiar to all scholars of the Irish Diaspora.  And that standard email would, again and again, be quoted – often behind the scenes – as the Irish Diaspora List lived through all the political developments and crises of those twenty years, 1997 to 2017.

As can be seen, the List was a ‘moderated list’ – every message to the List was inspected and approved by one of our team of moderators, before that message was distributed.  We are now all too familiar with consequences in discussion forums where that does not happen.  Our guide to global culture’s current strange mix of orality and literacy remains as it always was, Walter Ong, and the versions of Orality and Literacy: The Technologizing of the Word, from 1982 onwards.  It was Walter Ong who gave us the mantra, ‘the inherent contumaciousness of texts’.  All I can say now is that some of the cleverest people I know had to be, secretly, saved from themselves.  Often.

So, in the background, in running a forum like the Irish Diaspora List there are two rules…

2.  The beast must be fed.  Enough new material must enter the discussion forum to keep the members interested.  Interested, but not overwhelmed.

For me, this was easy.  I had alerts in place.  I had put alerts in place, using the technological developments outlined above, to bring together the series, Patrick O’Sullivan, Editor, The Irish World Wide, 6 Volumes, 1992-1997.  I added further alerts.  I continued to map, catalogue, and seize hold of developments in the study of the Irish Diaspora – and part of the fun of the Irish Diaspora List for me was that it was easy enough to share observations, references and texts with members of the List.  And it was really wonderful to watch our field develop – and to see filled, by much good work, those aching gaps in The Irish World Wide series.

Of course, all my alerts are still in place, and I am still mapping developments in the study of the Irish Diaspora.

The study of the Irish Diaspora is now in a decent enough state.  It could be in a better state – which is something I had hoped to explore further in my new role as Visiting Professor of Irish Diaspora Studies, London Metropolitan University.  We shall see.

Posted by Patrick O'Sullivan at 19:31 No comments: 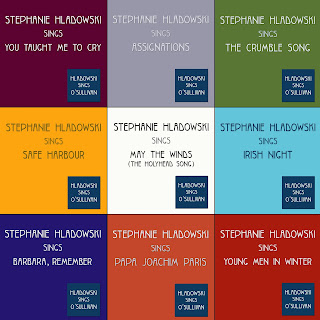 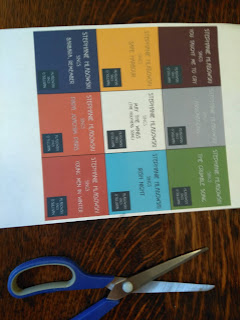 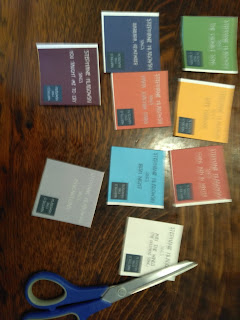 It turns out that there is a technical term for what we have been doing...

It is called an 'incremental album'.  We have released our 9 singles, one by one, in no special order.  Simply, when we had a track ready to slot into the technology, we sent it off...

All 9 tracks are now visible...
This is
Hladowski sings O'Sullivan
On Spotify
https://open.spotify.com/playlist/4CsWFZueGOMfaVqKKV0vPB

And on everything else - wherever you find your music it will be there...

Next, we must create the album, which means negotiating an entirely new set of technological hurdles.

Do we think of the album as a gig, with a set list - a plan to protect the performers, and carry the audience?

Or do we think of the album as a 'journey'?  Or as a guided meditation...?

And here is how you can help.

Carefully, with a pair of scissors (not supplied) cut out the 9 small squares.

Listen to the 9 tracks, and re-arrange the tracks, to make an album - using the 9 squares as an aide memoire.

Then tell me what to do - just give me instructions and advice.  You can, if you like, photograph the 9 squares in your chosen sequence.

Note that on some music sites you can create playlists and shuffle playlists.


Posted by Patrick O'Sullivan at 14:51 No comments: